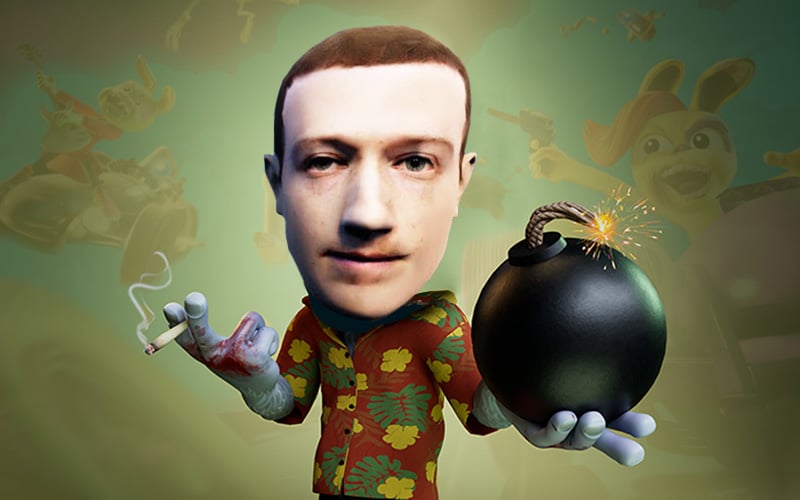 In the game, Metazuckbot runs ZuckCorp, where the main character is a hooligan rabbit with a cute appearance being imprisoned. After being freed, the rabbit roams the city with the former slaves of the villain, ZuckBots. It is known that in-game characters such as the thug bunny are NFT products of the previous My Pet Hooligan collection, or ZuckBots will also be released with the NFT collection earlier this week.

Rabbit Hole is a product of animation studio AMGI Studios, which has received funding from the likes of Yield Guild Games, Emfarsis, Delphi Digital and Bitkraft Ventures.

The community considers this to be a "very and this" metaverse game project when the 50-person team consists of developers with long experience, who have worked at Call of Duty and Medal of Honor, or other companies. Artists and animators from Pixar and Disney.

“We are always looking for inspiration from something interesting and want to bring it into the game. Regarding the lore related to Zuckbot, it is mainly inspired by the fact that "big corporations are trying to exploit data" and turn users into "prey" for their own profit. Basically, we're just observing and dissecting what's happening around us."

As Coin68 reported, the metaverse segment of Meta (Facebook) continued to suffer a heavy loss in Q3/2022 with a loss of up to $9.4 billion . Unintentionally or by accident, Rabbit Hole's NFT collection came on the same day as Meta's dismal earnings announcement.

While Zuckerberg believes his investment in the metaverse will pay off in the long run, he's currently having a hard time convincing the world of his plan. According to a poll of Meta employees in May, only 58% of employees understand the company's metaverse strategy.

Such an impressive debut, but whether Metazuckbot can keep its hotness in the metaverse because of its really good values, it will be like "colorful or pretentious" projects that go nowhere. Rabbit Hole is expected to release in Q4/2022 or Q1/2023 on the Epic Games Store. Web3 publishing platform Paragraph has raised $1.7 million in a pre-seed funding round led by the Lemniscap fund. According to the company statement, investors in this round include big names like FTX Ventures, Binance Labs, GCR and Seed Club Ventures. Free-to-own: A new step forward for the next generation of Web3 Gaming?