What is Soulbound Token(SBT) & How it Works?

The Soulbound Token (SBT) is a non-transferable, publicly verifiable token that is linked to a “Soul” wallet address.

NFT is known to be one of the most practical applications of crypto. Because of that, many more versions have been developed to optimize NFT uses, such as Fractionalized NFT, Semi-Fungible Tokens… One of the versions that received a lot of attention from the community during this time. Recently Soulbound Token.

Let's learn about Soulbound Token and how they work in today's article.

What is Soulbound Token?

The Soulbound Token (SBT) is a non-transferable, publicly verifiable token that is linked to a “Soul” wallet address. SBT acts as a kind of CV for Web3 users , which can show the individual's membership, achievements, and affiliation information.

SBT is like a Non-fungible Token (NFT), each token is unique and the relevant information about that NFT will always be kept on the blockchain. But unlike NFT, Soulbound tokens will not be able to be sent back and forth, bought and sold, but tied to the wallet containing it, called "Soul".

SBT was conceived by 3 people including:

Soulbound Token introduced by Vitalik is inspired by the famous World of Warcraft game, in this game players when completing missions will be rewarded with items called "soulbound", these items are also not can be traded or exchanged between players.

Learn more: Who is Vitalik Buterin?

Not only that, this token can also be used in many other cases. First, let's learn about how this token works.

The functions and operation of Soulbound Token are quite similar to NFT, except for the ability to trade. For that reason, Vitalik Buterin classifies this token as a form of NFT. SBTs are also unique tokens, non-divisible, non-swapable, and can also carry a variety of attribute information.

As mentioned above, SBT is simply tokenizing all the information that makes up a person or entity such as characteristics, features, achievements, etc. SBT was conceived to be used for social building purposes. Decentralized Assembly (DeSoc). In it, SBT is issued and stored in wallets called soul. Soul is not only a wallet containing SBT but also used to determine the origin and authenticity of SBT.

All information about SBT, issue wallet, Soul address is publicly stored on the blockchain, so anyone can find information about the lifecycle of a Soulbound Token. In addition, a person can own multiple Souls at once.

Why is Soulbound Token necessary?

Web3 and the ecosystem around Web3 is growing very fast in a short time. Web3 has many innovative points that can bring success, but there are also many limitations.

One of the biggest limitations is the lack of elements to build trust between users, this is because Web3 is a world that values ​​security and allows users to be completely anonymous when interacting with protocols . _

Recently, the famous Azuki NFT collection hit an All-time-low price after the scandals about their founder having abandoned many previous projects. The above event affected the reputation of the Azuki collection and caused a lot of controversy in the community. 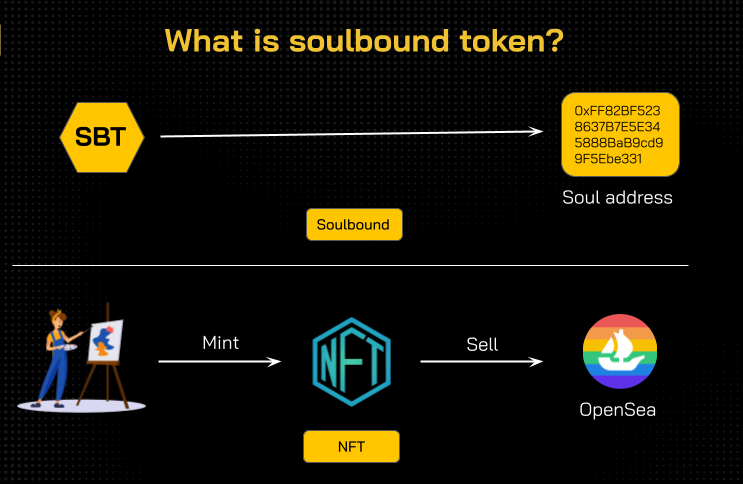 Or as with the case of Solend's hijacking , when this project made important proposals and needed user voting, there was an elephant wallet that owned a lot of SLND tokens to vote. This wallet alone accounted for 90% of the total participation rate of SLND and of course almost completely decided the outcome of the vote.

In addition, there are some other limitations such as:

Soulbound token was created to contribute to the efforts to realize the decentralized society (Decentralized Society) and partly solve the above problems.

SBT's non-transferrability and individuality make it possible for the token to serve as a means of enabling protocols to operate on trust and while maintaining privacy.

To put it simply, NFT serves to prove an owner's assets, while SBT serves to prove his identity and confirm his reputation. Imagine that, with SBT, you could review a person's entire business history before lending to that person; can also see the job experience before hiring the person…

If this way of working is actually applied to SBT, this will be a whole new way of looking at user identities in Web3 arrays.

With the above characteristics, where can Soulbound token be applied?

Current NFT collections are quite dependent on centralized systems to operate or prove the origin of that NFT. NFT artists can link Soulbound tokens to their NFT collections, making it easier for users to find the origin, avoiding cases of being scammed by fake artist forms.

SBT can also help NFT artists build a reputation in the community.

The use of SBT can help DAOs prevent Sybil attacks. Sybil attack is simply a form of security attack when someone tries to take control of the network by creating multiple accounts, nodes, fake identities or computers.

With crypto, the majority of DAO proposals are voted on by governance tokens, meaning that if one person holds the majority of the tokens, that person can gain control of the entire protocol.

These issues can be solved by using SBT to represent voting rights in the DAO. SBT cannot be bought, sold or transferred, which makes it impossible for whales to accumulate enough tokens to create a Sybil attack.

Furthermore, voting rights can also be given to soul wallets that hold SBTs that meet the required standards, assuming licenses, educational certifications, endorsements from other soul wallets, etc.

The most practical example is that of Optimism , this project announced its form of governance by establishing Citizen House, whose members are the owners of Citizen NFT, a kind of Soulbound NFT. Vitalik Buterin has also expressed his support for the new governance model of Optimism.

Unsecured unsecured loans are a widely used form of borrowing and have long been supported by banks in the traditional financial market. However, DeFi Lending platforms, including the biggest names like Aave, Compound, have not been able to provide this loan service so far due to their focus on the decentralized environment.

SBTs can also be a testament to the certificates and skills that users have achieved. For example, a center may issue graduation certificates to those who take and complete a course with SBTs. If this center issues certificates in the form of NFT, students can sell them on the NFT exchange, but with Soulbound tokens, they cannot.

Similar to other work in Web3, SBT can be a certification of an individual's contributions to a certain DAO, or proof of membership in a certain community. Of course, this information is public and verifiable on the blockchain.

Soulbound token brings a new form of governance token allocation to projects. Normally, projects will allocate their tokens through token sales or airdrops, but these methods can lead to the allocation not to actual contributors to the project or cause a Sybil attack.

With SBT, Vitalik suggests projects that can improve airdrop quality by airdropping governance tokens to soul wallets with SBT that clearly demonstrate reputation points, active user participation in protocol activities in the protocol. past.

What to do when you lose your soul wallet?

With the above important uses, it would be very troublesome to lose the soul wallet that stores your important information, so what to do when the soul wallet is hacked or the user forgets the private key of the wallet?

This is also a major difference from NFTs. When a user loses the wallet that holds the NFTs, of course there is no way to get it back. With the soul wallet it is different, Vitalik has proposed the "social recovery model" - a model that helps users recover their wallets.

With this model, users can designate a group of people or organizations as “guardians”, these guardians have the ability to access and change the private key of the wallet. However, assuming you no longer play with that group of friends, or those friends change wallets, what happens?

Therefore, the social recovery method with SBT selects guardians according to the properties of that SBT in real time. For example, people participating in the same DAO, participating in an offline event…

When will Soulbound token officially launch?

According to Vitalik, the Soulbound token (SBT) could be officially launched to the community later this year, which is the first step in the Ethereum founder's ambition to create a decentralized society (DeSoc) by 2024.

This means that the functions and uses of the new Soulbound token are theoretical and can still change in the future, the uses that this token brings will take time to test.

Soulbound token is an innovative idea launched by 3 very minded people in the crypto market, including Vitalik Buterin. However, this idea is just on paper and pen, nothing can prove it will succeed. SBT may also give users limitations such as revealing too much confidential/sensitive information, may not work as expected due to being too new, etc.

Let's look forward to the practical applications of the Soulbound token put into use by projects like Optimism to see if this is the future of decentralized governance.